Black Lightning (DC Comics) can ionize hydrogen atoms to further his own capabilities.

The user can ionize different types of atoms and molecules, which can be caused by simply heating up air/gas, electrical activity, or changes in the air's electric fields, etc. In other words, the user can create plasma that they can use as a ionized air channel/medium for to allow electric current to flow through, thereby creating electricity. They can tap into a variety of different energies, even cause certain ionization to produce positive electricity. They can also ionize different types of metal to create more efficient weapons. 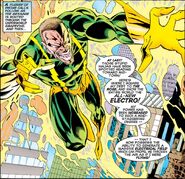