Iihiko Shishime (Medaka Box) can deal damage to the world that does not heal and inflict injuries on others that do not recover, unless he is defeated.

Inflict damage that cannot be repaired/healed.

The ability to inflict damage and destruction that cannot be repaired or healed from its destroyed state. Variation of Destruction.

The user can inflict damage and destruction that cannot be repaired or healed from its destroyed state. The pain/injuries do not recover from their degraded state and remain in complete decadence after the wounds are given. The degraded alterations a user makes towards their environment also does not recover nor can it be made towards a healed state after the damage is done.

When Diana (Marchen Awakens Romance) freed Phantom from prison, she left a curse on the cell making it irreparable with any magic.

The pain and damage caused from overusing Ghost ÄRMs (Marchen Awakens Romance) cannot be healed by any means.

Kaguya Ōtsutsuki (Naruto) using her Murderous Bone Ash/All-Killing Ash Bones, which will cause irreversible disintegration, as even Naruto's powers could not staunch it.

Bakusaiga (Inuyasha) can unleashed demonic energy that disintegrates and nullifies regenerative powers of the target.

Queen Moon Butterfly's (Star vs The Force of Evil) dark spell made Toffee unable to regenerate his severed middle finger. 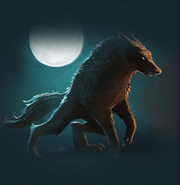 Werewolves (Harry Potter) inflict wounds that will never heal, as they are cursed wounds.

Josuke Vs Okuyasu (Part 2)-2
Community content is available under CC-BY-SA unless otherwise noted.