Use the traits of Jack O'Lantern.

The power to use the abilities of all types of Jack O'Lantern. Variation of Scarecrow Physiology.

The user is or has the ability to take on the form of Jack O'Lantern, although the original one was a human banned from the afterlife, most users are more like a scarecrow in appearance and abilities, aside from their fire-related abilities. As a legacy-bearer of a being banned from restful death, they have a high-level resistance against the supernatural.

Jack O'Lantern was an old Irish folktale that said Jack imprisoned the Devil in a tree and placed crosses around it to prevent the devil from coming down. Jack agreed to let the Devil down as long as he didn't take his soul.

Eventually Jack died and became a wandering spirit, but he was banned from Heaven because of his sinful and stingy ways and the Devil did not take his soul due to his trickery during their encounters, so he banned Jack from hell as well. So Jack asked where to go, as he had no light, and the Devil mockingly tossed him an ember from the flames of hell that would never burn out.

Jack carved out one of his turnips (which was his favorite food), placed the ember inside it, and began endlessly wandering the netherworld in search for a resting place. He became known as "Jack of the Lantern", or Jack-o'-Lantern. 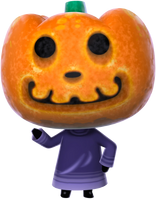 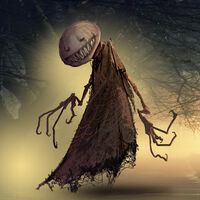 A Hervoken (Doctor Who: Forever Autumn) 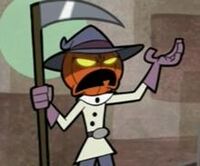 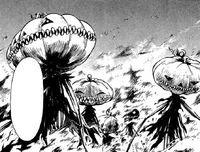 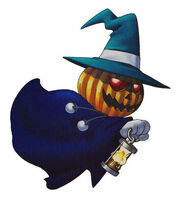 Jack Pumpkinhead (Return to Oz) from a darker, future version of the Wizard of Oz possesses a Jack O'Lantern physiology. 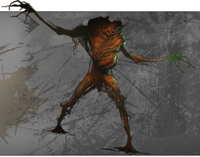 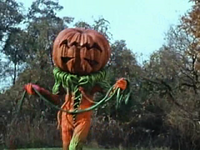 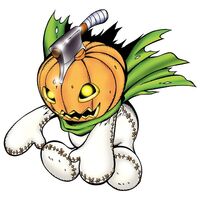 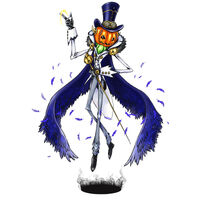