Use the traits of jiang shi.

The power to use the abilities of jiang shi. Variation of Undead Physiology.

The user can become or use the skills and abilities of a jiang shi (lit. "stiff corpse"; geung-si in Cantonese, cương thi in Vietnamese, gangshi in Korean, kyonshī in Japanese), also known as a Chinese "hopping" vampire, a type of undead in Chinese legends and folklore. Most jiang shi are created when a person's soul fails to leave the body, usually due to an improper death, an act of suicide, simple desire for trouble or via Necromancy.

Their appearance ranges from unremarkable (as a recently deceased person) to horrifying (rotting flesh, rigor mortis, as corpses that have been in a state of decay over a period of time). Jiang shi absorbs life energy, but because of modern Western influence, some do now drain blood instead. They have pale, sometimes greenish-white, skin, long clawlike fingernails, and a long prehensile tongue. They are usually dressed in Qing Dynasty robes.

In some versions, they detect potential victims by their breath and holding one's breath will temporarily hide from one; some stories report that if you suck the unexpelled last breath out, the corpse will fall inanimate.

Jiang Shi are said to originated from the folk practice of "Traveling a Corpse Over a Thousand Li", where families who could not afford much in the way of traveling expenses for a deceased family member who died far from home would hire a Taoist priest to transport the body.

The priest would tack a talisman to the body's forehead, which would enable the body to find its way back to its original home for proper burial by hopping. Taoist priests would only transport the bodies at night, and would constantly ring bells to warn other nighttime pedestrians that a Jiang Shi was coming their way; the pedestrians, of course not wanting to be seen by a Jiang Shi, would vacate the area immediately. To protect themselves, the priests would wear a headdress that had a veil covering their faces; this way, the Jiang Shi they were transporting would travel alongside them without the temptation to devour the priest. 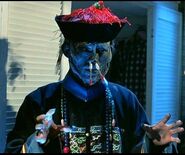