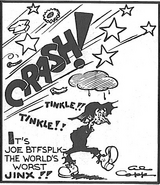 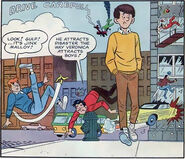 Doof (Phineas and Ferb) planned on giving his brother Roger bad luck Stinkelkrampen-inator in reverse mode.
Add a photo to this gallery
Retrieved from "https://powerlisting.fandom.com/wiki/Jinx?oldid=1452485"
Community content is available under CC-BY-SA unless otherwise noted.