Use the traits of Jorōgumo.

Power to use the abilities of Jorōgumo. Variation of Yokai Physiology and Spider Physiology.

User with this ability either is or can transform into a Jorōgumo (lit. binding bride), a spider-yokai that can change its appearance into that of a seductive woman. They are skilled actors and musicians, and associated with the deep pools and waterfall basins. 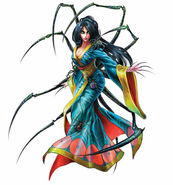 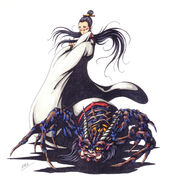 Big Mama (Rise of the Teenage Mutant Ninja Turtles) is based on the Jorogumo as she is a Spider Yokai that can change between her spider form and her human form
Add a photo to this gallery
Retrieved from "https://powerlisting.fandom.com/wiki/Jor%C5%8Dgumo_Physiology?oldid=1209310"
Community content is available under CC-BY-SA unless otherwise noted.