Eiki Shiki, Yamaxanadu (Touhou Project) can pass judgement on anyone or anything, once she has judged someone nothing can overturn it.

The user can judge, and decide or deny anything. Once a target has been judged, they are automatically affected by the power.

The Judgement Gate (Ah! My Goddess) is able to judge and decide or deny whether or not any two people are allowed to be together, and separating them forever if they fail.

The Living Tribunal (Marvel Comics) is a master of judgement manipulation, able to judge even some of the most powerful marvel entities. 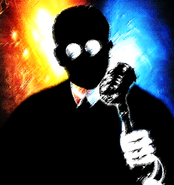