Use the traits of kappa
Power to use the abilities of kappa. Variation of Yokai Physiology.

User with this ability either is or can transform into a kappa, a type of water spirit that inhabit the ponds and rivers. As water monsters, kappa have been frequently blamed for drownings, and are often said to try to lure people to the water and pull them in with their great skill at wrestling. They are said to take their victims for the purpose of drinking their blood, eating their livers or gaining power by taking their souls.

Kappa are typically depicted as roughly humanoid in form, and about the size of a child with scaly, reptilian skin ranging in color from green to yellow or blue and have various features to aid them in this environment, such as webbed hands and feet. They are sometimes said to smell like fish, and they can certainly swim like them. Although their appearance varies from region to region, the most consistent features are a carapace, a beak for a mouth, and the sara, an indentation on the top of their head that holds water which is regarded as the source of their power. While they are primarily water creatures, they do on occasion venture on to land, when they do, the sara can be covered with a metal cap for protection.

Kappa are usually mischievous troublemakers or trickster figures, their pranks range from the relatively innocent, such as loudly passing gas or looking up women's kimonos, to the malevolent, such as drowning people and animals, kidnapping children, etc. 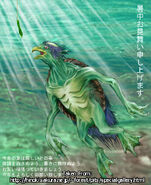 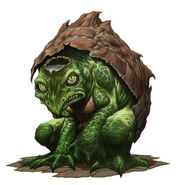 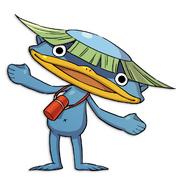 Walkappa (Yo-Kai Watch)
Add a photo to this gallery
Retrieved from "https://powerlisting.fandom.com/wiki/Kappa_Physiology?oldid=1513529"
Community content is available under CC-BY-SA unless otherwise noted.