Key to the Door

The ability to create or be a gateway or "key" to a certain location, artifact, entity or event.

User can create or be a gateway or "key" to a location, artifact, entity or event, whether literal, conceptual, personal, purely spiritual or anything else.

As the human form of the Key, Dawn Summers' (Buffy the Vampire Slayer) blood can open dimensional barriers when used in the proper ritual.

The Perfect Amulet (Devil May Cry) serves as a key to the Temen-ni-gru's gateway to the Demon World.

Hellboy's (Hellboy) Right Hand of Doom is the key that will free the Ogdru Jahad from their imprisonment.

The seven Princesses of Heart (Kingdom Hearts series), when gathered together, are the key to opening the Door to Darkness.

Depending on the game, the Master Sword (The Legend of Zelda) is either the final key to open the door to the Sacred Realm, or a key keeping the seal on an imprisoned Ganondorf intact. 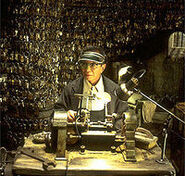 The Keymaker (The Matrix) possesses numerous keys that enable him to travel anywhere in the Matrix. 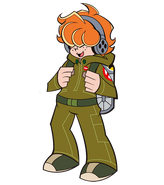 Briefs (Panty and Stocking with Garterbelt) is the key to opening Hell's Gate.

The Four Maidens (RWBY) act as keys to access the Relics hidden under the Huntsman Academies.

SCP-005 - Skeleton Key (SCP Foundation) is a key that can open any locks on doors.

SCP-860 - Blue Key (The SCP Foundation) can change the location to which a door leads, but only if the door is located at a certain location.

The Colt (Supernatural), is a one of a kind gun created by Samuel Colt that is also a key that opens and closes a gate to Hell.

The Four Horsemen's (Supernatural) rings can be used together to open a portal to Lucifer's Cage.

Lilith (Supernatural) is the first demon and the final seal to open Lucifer's Cage.

The Mark of Cain (Supernatural) is the key keeping the Darkness, an ancient primordial being that predates God, sealed away.

Raven (Teen Titans) is not only Trigon's daughter, but the portal that will enable him to invade and destroy the world.

Merry Nightmare (Yumekui Merry) is both the gate and gatekeeper of the dream world, as such she is the only being capable of sending dream demons back to the dream world rather then killing them.

Keymaker (Valkyrie Crusade) can instantly make a key to any door, both physical and metaphysical.

Mane Six (My Little Pony Series), use the Keys of Harmony to open Chest of Harmony to releasing a rainbow-like blast of power that transforms them.

Emerald Key (Sofia the First), a magical key that leads whoever possesses it to the Kingdom of Hakalo, a hidden island Kingdom.

The Key of Steel (Mighty Med) can open any Door, lock, case, and prison

The Skeleton Key (Danny Phantom) can unlock any door, realm, case, or prison in the Ghost Zone, specifically a special prison known as the Sarcophagus of Forever Sleep which contains the Ghost King.
Add a photo to this gallery
Retrieved from "https://powerlisting.fandom.com/wiki/Key_to_the_Door?oldid=1444156"
Community content is available under CC-BY-SA unless otherwise noted.