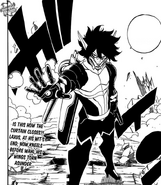 Ichigo and Uhohana
Even while smiling serenely, Retsu Unohana, being the first Kenpachi and the most diabolical criminal to have existed within Soul Society, can get people to do what she 'requests' by projecting Killing Intent.
Add a photo to this gallery
Retrieved from "https://powerlisting.fandom.com/wiki/Killing_Intent?oldid=1132535"
Community content is available under CC-BY-SA unless otherwise noted.