Due to a special blessing from one of her benefactor Dark Gods named Slaughter, Devastation (DC Comics) was granted the knowledge of the way to kill any living thing.

Have intuitive knowledge of how to kill anything.

"We're going through the fence! Get your cars, get your guns, we're going in! Kill 'em all."
― Philip Blake/The Governor, The Walking Dead

The ability to have intuitive knowledge of how to kill any living being. Variation of Intuitive Aptitude.

The user has instant knowledge on how to kill any living being regardless of how powerful they are. This ability comes in great significance when dealing with seemingly unstoppable opponents and allows the user to end their lives with expedient efficiency.

Light Yagami (Death Note) became so talented with the Death Note that he could orchestrate elaborate kills, and even plotted a Shinigami's demise.

Having lived for over 5 centuries, Utsuro (Gintama) has accumulate enough experience that he claims he knows how to end any life in the world aside from his own.

They say Kaido (One Piece) will always kill his opponent in a one-on-one fight. Whether it's on the land, sea, or even the sky, he’s known as the strongest of all living things.

The Vinsmoke Family (One Piece) are a powerful family of prestigious Underworld killers with connections to the black market and advanced technology that once helped them rule the entire North Blue.

Carnage (Marvel Comics) is incredibly skilled indirect mass murder, while the Joker (DC Comics) prefers his usual comedic ways to kill, causing the two to argue over whose way is better.

Meg and Chris Griffin (Family Guy) were able to kill every student in the James Woods High school during one fight. 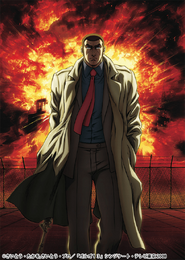 Lord Voldemort (Harry Potter) is a prolific killer who uses the Killing Curse extensively and very effectively.
Add a photo to this gallery
Retrieved from "https://powerlisting.fandom.com/wiki/Killing_Intuition?oldid=1396538"
Community content is available under CC-BY-SA unless otherwise noted.