Judith (Los Protegidos) can charge tiny objects with kinetic energy and use them as projectiles.

User can transfer kinetic energy from one object to another, thus strengthening their attacks, or tearing holes in walls with a simple touch, turn an object's potential energy into kinetic energy, making it explosive, or cause a target to be unable to move or unable to stop if in motion. 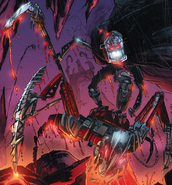 One of the many powers granted to Vezon (BIONICLE) was the ability to manipulate kinetic energy.

... and concentrate it throughout his body.

Jak (Jak and Daxter) can channel and manipulate Blue Eco, using it to enhance his speed, break boxes by just being near them, and activate long dormant technology. 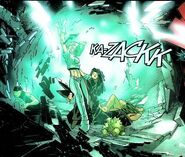 Through the use of Fa Jin, Izuku Midoriya (My Hero Academia) is capable of building kinetic energy by repeating regular motions and and store it for an explosive burst of speed and power.
Português do Brasil
Community content is available under CC-BY-SA unless otherwise noted.
Advertisement