Hibiki (Fairy Tail) with his Archive Magic can influence information.

The ability to manipulate information/knowledge. Not to be confused with Science Manipulation.

The user can create, shape and manipulate any/all information/knowledge, they can insert new knowledge into the universe that becomes established fact and reality, or destroy it to do the opposite. An enemy could be made to forget how to walk, while an ally could be given the knowledge of an enemy's weaknesses or mastery of a fighting style.

The Isu (Assassin's Creed series) possessed "knowledge" as a sixth sense, and as a result, had precognitive abilities. 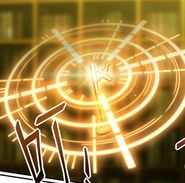 Void Wanzang the Library (Honkai Impact 3rd) created an archive of all knowledge from previous eras.