Replicate the learned knowledge and skills of others.

The power to replicate the learned knowledge and skills of others. Sub-power of Knowledge Manipulation. Opposite to Knowledge Projection.

The user can gain/replicate any kind of knowledge, be it knowledge over a subject, a foreign language, or mastery of a fighting style. They can duplicate information from creatures or inanimate mediums of data, such as books, computers, etc almost instantly via Touch or Visually. the user is also able to stockpile this knowledge on the their own and others they have copied.

This may be active (user has to focus) or passive (constant absorption).

Buffy Summers (Buffy the Vampire Slayer) is able to call upon the knowledge and memories of past Slayers. 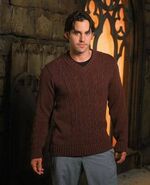 Xander Harris (Buffy the Vampire Slayer) obtained extensive knowledge of military procedure after being temporarily transformed into a soldier.

Emiya Shirou (Fate/Stay Night) projecting the Nine Lives, a secret sword technique while projecting Hercules’ Axe Sword. During duplication, Shirou can even read the wielder’s skills, which allows him to gain all kinds of Noble Phantasms and combat skills. 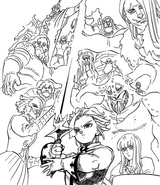 When wielding Excalibur, Arthur Pendragon (Nanatsu no Taizai) is able to acces the essence and experience of the souls of the master swordsmen imbued on it. 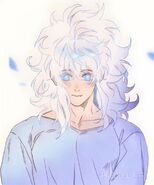 As a Divine Beast Nuah (Rix Vanus) can gain knowledge by touching his forehead with the forehead of someone else's.
Community content is available under CC-BY-SA unless otherwise noted.
Advertisement