Use the traits of Krampus.

The power to use the abilities of the Krampus. Variation of Cryptid Physiology and Holiday Entity Physiology.

The user is or has the ability to take on the form of Krampus, a beast-like creature from the folklore of Alpine countries thought to punish children during the Christmas season who had misbehaved. Although Krampus appears in many variations, most are hairy beast-like creature of demonic appearance, usually brown or black, have cloven hooves and horns of a goat, with a long tongue. They carry a basket or a bag on their back and with rusty chains and bells.

He is often presented as either as an enemy or partner to St. Nicholas, representing the darker aspects of Christmas and what awaits for those who have been bad during the holiday season kidnapping and frightening children as punishment for being naughty.

Krampus often targets children, either to simply scare them, whip them, eat them, or some other nefarious purpose.

The Grinch (How the Grinch Stole Christmas)

The Grinch (How the Grinch Stole Christmas) 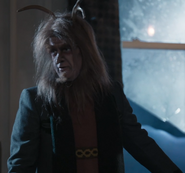 Gumphernickel (Your Pretty Face is Going to Hell)

Krampus (Your Pretty Face is Going to Hell) 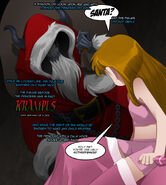 Krampus (Pathfinder)
Add a photo to this gallery
Retrieved from "https://powerlisting.fandom.com/wiki/Krampus_Physiology?oldid=1401641"
Community content is available under CC-BY-SA unless otherwise noted.