Take on the characteristics of a Kuchisake-Onna

The power to have the traits and abilities of Kuchisake-Onna. Variation of Ghost Physiology.

Users either are or can transform into a Kuchisake-Onna (Slit-Mouthed Woman) a figure appearing in Japanese urban legends. She is a woman who was mutilated by her husband, and returns as a malicious spirit.

According to the legend, children walking alone at night may encounter a woman wearing a surgical mask, which is not an unusual sight in Japan as people wear them to protect others from their colds or sickness. 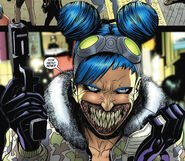 Kuchisake-Onna (Tasogare Otome x Amnesia)
Add a photo to this gallery
Retrieved from "https://powerlisting.fandom.com/wiki/Kuchisake-Onna_Physiology?oldid=1015327"
Community content is available under CC-BY-SA unless otherwise noted.