Alice (Pandora Hearts) in her demon form known as B-rabbit.

Use the traits of lagomorphs.

"Bunnies aren't just cute like everybody supposes
They got them hoppy legs and twitchy little noses
And what's with all the carrots?
What do they need such good eyesight for anyway?!
Bunnies! Bunnies! It must be bunnies!"
― Anya, Buffy the Vampire Slayer, "Once More with Feeling"

"That's no ordinary rabbit! That's the most foul, cruel and bad-tempered rodent you ever set eyes on! It's got a vicious streak a mile wide, it's a killer! It's got huge sharp... it can leap about... look at the bones!"
― Tim the Enchanter, Monty Python and the Holy Grail on the Killer Rabbit of Caerbannog

The power to use the abilities of Lagomorphs. Variation of Mammalian Physiology.

User with this ability either is or can mimic/transform into lagomorphs, including hares, rabbits and pikas.

Lagomorphs are associated with great number of mystical and supernatural abilities and connections in mythology and folklore, thus user with this power may have access to: Lunar Affinity, Lunar Manipulation, Trickster 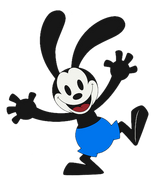 Yin and Yang (Yin Yang Yo!)

Eunice (Ben 10) Lagomorph Physiology
Add a photo to this gallery 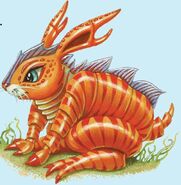 Miyamoto Usagi (Usagi Yojimbo), an anthropomorphic rabbit.
Add a photo to this gallery 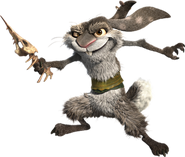 Squint (Ice Age) is a rabbit who serves as a member of Captain Gutt's pirate crew.

Judy Hopps (Zootopia), an anthropomorphic rabbit.
Add a photo to this gallery 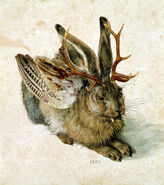 Wolpertinger (Bavarian Folklore)
Add a photo to this gallery 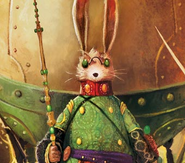 The settled form of Lee Scoresby’s dæmon, Hester (His Dark Materials) is an Arctic hare.
Add a photo to this gallery

Super Rabbit (Bobobo-bo Bo-bobo) is a lazy, but powerful rabbit who serves as a subordinate of one of the Six Cyber Knights, Sonic. 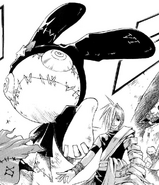 Carrot (One Piece) is a rabbit mink and a member of Mokomo Dukedom’s Warrior Tribe. 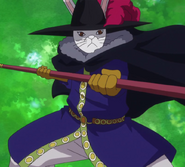 Randolph (One Piece) is an anthropomorphic rabbit who serves as a combatant for the Big Mom Pirates. Like many of the residents of Totto Land, Randolph was given a human soul by Big Mom.

Takeshi Tomoe (Project Arms) can turn himself into an Arm in Lagomorph Form.

The White Rabbit (Project Arms), the form Takeshi Tomoe takes when transformed to full state.
Add a photo to this gallery 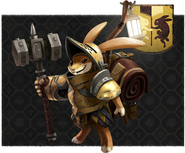 Members of the Viera (Final Fantasy) 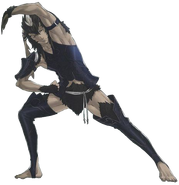 Vanilla the Rabbit (Sonic the Hedgehog)

Artamos (Wadanohara and the Great Blue Sea) before turning into a robot ... 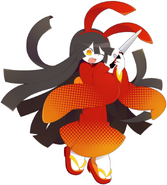 Haley (Dust: An Elysian Tail), an anthropomorphic rabbit.
Add a photo to this gallery 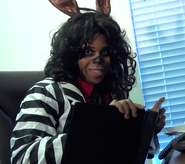 Velvet Scarlatina (RWBY), a rabbit Faunus.
Add a photo to this gallery
Retrieved from "https://powerlisting.fandom.com/wiki/Lagomorph_Physiology?oldid=1335395"
Community content is available under CC-BY-SA unless otherwise noted.