Master Hand (Super Smash Brothers) can use lasers to attack.

The ability to release/use lasers to various attacks. Sub-power of Laser Manipulation. Variation of Light Attacks.

The user can release/use lasers to attacks of various shapes and/or intensities, either projected, used as a part of melee attacks, etc.

Borsalino/Kizaru (One Piece) can fire photon energy beams from his fingertips with extreme accuracy and precision.

Franky (One Piece) fires a powerful laser beam to burn his enemies. 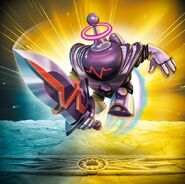 Blastertron (Skylanders)
Add a photo to this gallery
Retrieved from "https://powerlisting.fandom.com/wiki/Laser_Attacks?oldid=1682537"
Community content is available under CC-BY-SA unless otherwise noted.