The ability to project beams of laser. Sub-power of Laser Attacks. Variation of Light Beam Emission.

The user can create and project beams of laser that are capable of piercing virtually anything they come in contact with and have explosive properties. The user can control the intensity of their beams for a variety of effects ranging from harmless to combustible.

Whenever Kei and Yumi (Ape Escape 3) morph into the Cyber Ace they are able to project powerful laser bolts that can bounce off walls and strike multiple targets.

Based on Admiral Kizaru's light-based Devil Fruit powers, Bartholomew Kuma (One Piece) fires a laser beam from his mouth.

Emperor Calus (Destiny) can project a laser from his forehead called Emperor's Gaze.

Yuga Aoyama (Boku no Hero Academia) can fire a bright blue laser beam from his bellybutton with his Quirk: Navel Laser. 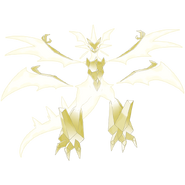 Ultra Necrozma (Pokémon) can fire laser beams from every part of its body, which can reach over 18 miles away and burn through everything in their path.

...The Herschel's Drive allows it to use omnidirectional laser attack via 30 Detachable Mobile Laser Guns.

The King Rings (Pair of Kings) can fire a powerful laser pulse beam of energy that is capable to destroying anything it hits.

Space Rangers (Toy Story/Buzz Lightyear of Star Command) have wrist rays on their uniforms allowing them to fire laser beams as their primary offensive weapons.
Community content is available under CC-BY-SA unless otherwise noted.