The power to emit laser beams from the eyes. Sub-power of Laser Attacks. Variation of Laser Beam Emission, Light Vision and Optic Blasts.

The users of this power can fire off lasers from their eyes which can cause destructive damage on their intended targets. 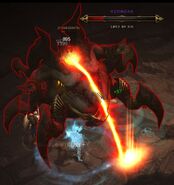 Brandon Breyer (Brightburn)
Add a photo to this gallery
Retrieved from "https://powerlisting.fandom.com/wiki/Laser_Vision?oldid=1356020"
Community content is available under CC-BY-SA unless otherwise noted.