The ability to use magic based on lava/magma. Form of Magic. Variation of Elemental Magic and Magma Manipulation.

The user is able to perform a form of magic that allows the user to cast magical spells and feats through lava/magma.

As the former Earth Warder, Neltharion/Deathwing (World of Warcraft) can harness magic derived from the earth, mountains and lava. 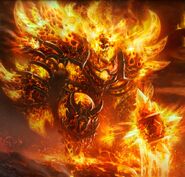 Being the Elemental Lord of Fire, Ragnaros (World of Warcraft) has the natural ability to cast magic based around lava.

When Koko casts an improved version of Zofis' (Zatch Bell!) Oruga Radomu spell, Zofis is able to manipulate lava in the shape of dragons.
Add a photo to this gallery
Retrieved from "https://powerlisting.fandom.com/wiki/Lava_Magic?oldid=1718518"
Community content is available under CC-BY-SA unless otherwise noted.