A leprechaun and his pot of gold.

Use the traits of leprechauns.

"You insult me — me who used to give courses in advanced Leprechaunology."
― Finian (Finian's Rainbow)

Power to use the abilities of leprechauns. Variation of Fairy Physiology.

User with this ability either is or can transform into a leprechaun, a type of fairy in Irish folklore, usually taking the form of an old man no taller than a small child, clad in a red or green coat, who enjoys partaking in mischief.

Like other fairy creatures, leprechauns have been linked to the Tuatha Dé Danann of Irish mythology. They spend all their time busily making shoes and store away all their coins in a hidden pot of gold at the end of the rainbow. If ever captured by a human, the leprechaun has the magical power to grant a wish/wishes in exchange for their release.

Modern leprechauns may be of either gender and any age and tend to have broader skills and interests beyond simply making shoes. 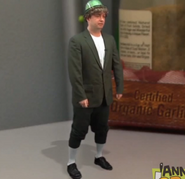 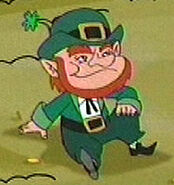 Leprechaun (American Dragon: Jake Long)
Add a photo to this gallery
Retrieved from "https://powerlisting.fandom.com/wiki/Leprechaun_Physiology?oldid=1513571"
Community content is available under CC-BY-SA unless otherwise noted.