"I've already trod on dangerous ground; we're on dangerous ground right now, because of our secrets and our lies. They're practically what define us. When the truth offends we..we lie and lie until we can no longer remember it is even there, but it IS, still there. Every lie we tell incurs a debt to the truth. And sooner or later that debt is paid. That is how...an RBMK reactor core explodes... lies."
― Valery Legasov exposing the Soviet Union and the KGB for their lies. (Chernobyl 2019)

"I came to you, broken, lost, in need, trusted you to be my teacher, and you fed me lies. "
― Kaecilius (Marvel Cinematic Universe)

The ability to force a person to lie. Sub-power of Lie Manipulation. Variation of Mental Inducement. Opposite to Truth Inducement.

The user can force/induce others to lie. 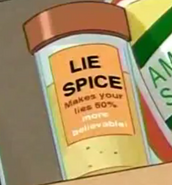 The Lie Spice (The Replacements) make their consumer's lies 50% more believable, but too much consumption causes uncontrollable lying.

Zofis (Zatch Bell!) uses his control over his partner Koko’s mind to make her tell horrible lies to her best friend Sherry in an attempt to crush her spirit.
Add a photo to this gallery
Retrieved from "https://powerlisting.fandom.com/wiki/Lie_Inducement?oldid=1546593"
Community content is available under CC-BY-SA unless otherwise noted.