Brook (One Piece) infuses his sword with his soul to create the Soul Solid.

Infuse life-force into anything.

The power to infuse life-force into objects (usually weapons), beings, or powers. Sub-power of Life-Force Attacks and Spiritual Force Manipulation. Variation of Energy Infusion and Infusion. Opposite to Death-Force Infusion and Life-Force Extraction. Not to be confused with Life Infusion.

The user can infuse objects (usually a weapon), beings or powers with life-force, empowering and energizing them, allowing the user to manipulate their qualities and efficiency.

Sir Connery (Archie's Sonic the Hedgehog) infuses the Sword of Light with his life force to attack Mammoth Mogul.

Iron Fist (Marvel Comics) can coat his fist in chi to perform his signature move, the Iron Fist.

Thanos (Marvel Comics) was capable to take the life-force of Syn and infuses it into Reptyl.
Add a photo to this gallery

…enhancing its nutrition to the point they can empower life.

Kōga Kuchiki (Bleach) infusing his halberd with his spiritual aura, increasing his power. 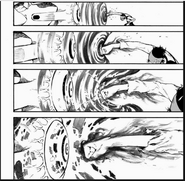 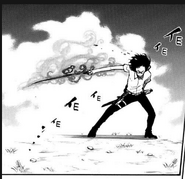 Son Gohan (Dragon Ball series), like most warriors, is able to channel his Ki into his body to empower his attacks.

When his sword was broken during the battle with Fused Zamasu, Future Trunks (Dragon Ball series) was able to form ki around the broken blade into the shape of Light Sword...

...and during the final battle with Fused Zamasu, he could form the hopes of the human ki of everyone on Earth around his Light Sword, creating Spirit Bomb Sword that was powerful enough to defeat Fused Zamasu.

Krillin (Dragon Ball) concentrating his Ki into his fists.

Kurohime (Magic User Kurohime) infusing her gun with the spiritual power of the four Spirit Kings to create the Ultimate Sword.

Thanks to his mastery of Haki, Vergo (One Piece) can infuse his fist...

...and his rubber muscles with Busoshoku/Armament Haki - Koka.

Donquixote Doflamingo (One Piece) infuses his fist with Busoshoku/Armament Haki - Koka to enhance the punching power.

Smoker (One Piece) infusing his elbow with Busoshoku/Armament Haki - Koka.

Kin'emon (One Piece) infusing Busoshoku/Armament Haki - Koka on to his swords.

Jinbe (One Piece) infusing his arms with Busoshoku/Armament Haki - Koka.

Sanji (One Piece) infusing his leg with Busoshoku/Armament Haki - Koka.

Charlotte Linlin/Big Mom (One Piece) infused parts of her own soul into a Sun, a Cloud, and a Bicorne Hat.

Reinhard (Re:Zero) can draw out all the spiritual energy in an area and infuse his weapon with its power.

Momotaro Tsurugi (Sakigake Otokojuku) infuses ki into his headband to harden it.

Ryo Bakura (Yu-Gi-Oh!) infuses his dice with a portion of his soul, ensuring he will roll a supercritical.

Kratos (God of War) infusing the Blades of Chaos with the Soul of Hades.

Puppeteer (Valkyrie Crusade) can infuse parts of her soul into all of her puppets.
Add a photo to this gallery
Retrieved from "https://powerlisting.fandom.com/wiki/Life-Force_Infusion?oldid=1579574"
Community content is available under CC-BY-SA unless otherwise noted.