The Holy Emperor, Vigoor, is the orginal Fiend Deity to spawn the race of fiends.

The ability to create living beings. Sub-power of Creation, for other possible connections see Associations.

The user is able to create living beings using several different ways, these beings can either be completely unique/original, modified/evolved versions of already existing ones or simply normal beings without any major modifications. Note that unless the user has separate powers that allow them to dominate their creations, these beings aren't particularly loyal. User can modify them so they have tendency to stay devoted to their creator, but this depends on how they are treated.

How/with what they are created:

Naraku (InuYasha) can create monstrous creatures from his body that is composed of such things. 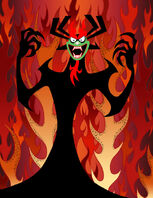 Shion Pavlichenko(Darker than Black) can copy living beings and objects.

Jumba Jookiba( Lilo & Stitch) can create experiements via inventions.
Add a photo to this gallery
Retrieved from "https://powerlisting.fandom.com/wiki/Life_Creation?oldid=116421"
Community content is available under CC-BY-SA unless otherwise noted.