Dandy (Space Dandy) is the one who determines how his life unfolds, meaning every decision that he makes is his alone and not controlled or forced upon him by any means, extending even to his own death/demise. He is such a singularity that not even the Narrator can control or understand him.

Determine and decide the entire focus of one's life.

"I see now that the circumstances of one’s birth are irrelevant. It is what you do with gift of life that determines who you are."
― Mewtwo (Pokémon The First Movie)

"Hey, write your own story."
― The Candlemaker (The Book of Life)

"I know this is not the path you would choose for me, but I have to walk my own path... and do what I know is right."
― Spyro (The Legend of Spyro)

The power to control, determine, and declare the entire plot/story/events of your own life. Sub-power of Solipsistic Manipulation. Technique of Existence Declaration and Freedom. Variation of Self Origin Manipulation and Life Story Manipulation.

The user controls, shapes, and determines their entire life, plot, events, and story (personal and otherwise). Including every encounter/meetings, past, future, quest(s), their destiny (or lack thereof), travels, path, personality/behavior, reincarnation, lifespan, skills/talent, class/job/profession, dreams/aspirations/goals, and each and every other facet/detail/aspect of their own life. Potentially even extending to how their life will end and/or if they will simply transcend or renew it instead of perishing.

Since the user is the one who decides what their life will eventually develop into and how it will play out, even their own evolution and growth as an individual and/or group is under their command. Due to the nature of the power, they cannot be tied down by any specific event or power that would try a rewrite their lives/plot other than one's own hand and desires.

Due to his resurrection as a wraith, Raziel (Legacy of Kain) is the only being in Nosgoth that is exempt from the Wheel of Fate, granting him full control over how his destiny and life unfolds; not even the omniscient Moebius can predict his path, merely echoes of potential actions.

As the Purple Dragon, Spyro (The Legend of Spyro series) is able to guide the fate of the era he is born into, allowing him to follow his own path; this enables him to alter destiny if he doesn't like what's supposed to happen or go along with it if he does.

Unlike the other protagonists, Lute (Saga Frontier) doesn't truly have a quest of his own, instead his story is more about him finding his own goal and place in the world. Making him only character who can create his own path/story without being tied down a single true objective... 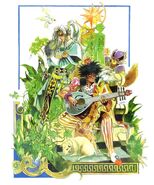 ...Due to his own overall plot being completely open and free, he can personally appear in every other character's quest as a recruitable party member without worrying about being rejected as a possible ally.
Add a photo to this gallery
Retrieved from "https://powerlisting.fandom.com/wiki/Life_Determination?oldid=1683926"
Community content is available under CC-BY-SA unless otherwise noted.