The Lifestream (Final Fantasy VII) is the wellspring from which all forms of life on the planet is both born/created from and returns to after death in a never-ending cycle.

Manipulate a wellspring of life.

"Byston Well, a mystical realm said to exist between Sea and Shore. Its the birthplace and training ground for our souls. When were born into our own world, most people forget their times spent in Byston Well."
― Opening Narration (Aura Battle Dunbine)

The power to manipulate the wellspring of life. Variation of Life Creation and Prime Source. Not to be confused with Life Water Manipulation or Life Derivation.

Life wellsprings may also act as a source of energy that can be tapped or channeled for various creative purposes.

Heart of Atlantis (Disney’s Atlantis: The Lost Empire) is the source of all atlantean life. 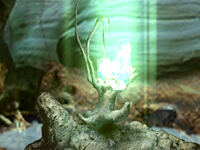 While submersed in the Lifestream, Sephiroth (Final Fantasy VII) learned to accumulate vast knowledge and power from it. As well as influence the flow of Mako to a vast degree for the purpose of furthering his own goals.

Each Planet Egg (Sonic X) embodies the life force of its home planet.
Add a photo to this gallery
Retrieved from "https://powerlisting.fandom.com/wiki/Life_Wellspring?oldid=1672532"
Community content is available under CC-BY-SA unless otherwise noted.