Kirito (Sword Art Online) was able to continue fighting even after being killed by Kayaba, which allowed him to defeat him and clear the game.

Continue to act after dying or being killed.

"When a man is faced with his own death, he finds the impossible less of a barrier."
― The Prince (Prince of Persia: Warrior Within)

"Even in death, the human body still remains active. Hair and fingernails continue to grow. New cells are produced... and the brain itself holds a small electrical charge... that takes months to dissipate. The T"-"virus" provides a massive jolt... both to cellular growth... and to those trace electrical impulses. Put quite simply, it reanimates the body."
― Red Queen (Resident Evil)

"I never saw it coming... but I felt it. I tried to vibrate my inner molecules to save my brain even as the bullet was tearing through. And in that moment, that very infintesimal split-second before death, I drew the Speed Force into me with every ounce of willpower I had left. I literally bought time. I'd expanded my moment of dying into days, maybe weeks... but it's like operating in a fog. Everything's a little unreal, and warped. I feel like I'm walking through water sometimes, and then when I speed up, I can feel my life slipping away."
― Professor Zoom (Suicide Squad: Hell to Pay)

"You guys give me a reason to live...even if I'm already dead."
― Makasu (Gemusetto: Death Beats)

The power to continue doing something after dying. Sub-power of Impossible State Survival. Not to be confused with Amortality, Undead Physiology or Reanimation.

User can continue doing something even after they have died, allowing them to continue to act even after their life has ended either by dying naturally or having been killed. So they could continue to fight someone after they died or even finish a project that they weren't able to while they were still alive.

Unlike Undead Physiology user is not truly undead, rather their body continues to move and react until all their remaining energy/stamina is gone and they finally stop moving or until their goal is completed.

Ryu (Breath of Fire II) can continue to fight even after being killed thanks to the power of his Guts technique.

Using the Speed Force, Eobard Thawne/Professor Zoom (DC Animated Movie Universe) was able to keep himself moving and active despite being shot through the head by Batman in the Flashpoint timeline. 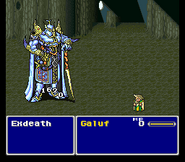 Due to his determination and love for his friends, Galuf (Final Fantasy V) is able to continue fighting Exdeath even when he has no HP left to do so. 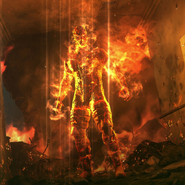 After being killed by Big Boss, Colonel Volgin's (Metal Gear Solid V: The Phantom Pain) hatred of Big Boss and desire for vengeance fueled him and allowed him to reanimate as the Man on Fire, only dying when he realized Venom Snake wasn't Big Boss and he was hunting the wrong man.

Even though she has been long-dead, Groa's (Valkyrie Crusade) degenerate soul still drives her to pointless battles and bloodsheds.

Adam fighting after death through sheer will
Community content is available under CC-BY-SA unless otherwise noted.
Advertisement