Two Become One (Kingdom Hearts series) is a Keyblade that combines the powers of light with an darkness using its own special ability, "Light & Darkness."

User can to create or wield weaponry with power over light-darkness, a mixture of light and darkness that nonetheless keeps the two as distinct entities. This ability is not only specific to mystic weapons, but also technologically advanced weapons. The power of the weapons depends on what they were created for or what level of light-darkness-based ability they possess.

The Naginata of Kenkon (InuYasha) is infused with the combined powers of light and darkness. 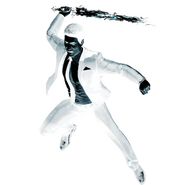 Mr. Negative (Marvel Comics) controls both the Lightforce and Darkforce, which he can channel through his weapons. 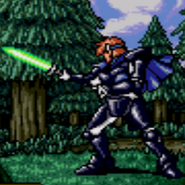 Max (Shining Force series) wielding the Chaos Breaker, a sword created as the combination between the Sword of Light and the Sword of Darkness.

The Annihilator Beam (Metroid Prime 2: Echoes) was a known weapon that Samus Aran possessed that could combine light energy and dark energy into an attack.
Add a photo to this gallery
Retrieved from "https://powerlisting.fandom.com/wiki/Light-Darkness_Weaponry?oldid=1391859"
Community content is available under CC-BY-SA unless otherwise noted.