Sakura Kinomoto (Cardcaptor Sakura) must utilize the Light and Dark Cards together.

The power to utilize light-shadow magic. Form of Magic. Variation of Elemental Magic and Light-Darkness Manipulation. Combination of Light Magic and Shadow Magic. Not to be confused with Twilight Magic.

The user is able to perform a form of magic that allows them to utilize the light-shadow element (light with shadow properties, shadow with light properties or both simultaneously), either magically manipulating it or using it to cast spells.

Through her glyphs, Shanoa (Castlevania series) is capable of utilizing spells connected to both the light and the shadow.

Shanoa (Castlevania series) using the Glyph of Gales to attack with balls of light and shadow magic.

A user of the Motes of Dusk and Dawn spell (Pathfinder).

Moroha Haimura (Seiken Tsukai no World Break) has past lives of both White Iron and Black Magic, allowing him to use both in tandem. 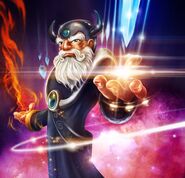 Master Eon (Skylanders) is capable of using dark and light magic, due to his extensive knowledge of and experience with magic in general.

Touta Konoe (UQ Holder) possesses both the White of Mars and the Black of Venus within him, allowing him to use both opposed sources of magic.

Wood Elves (Warhammer Fantasy) can make use of both the balanced, raw nature of Qhaysh, also known as High Magic, and the dark tendencies of Dhar, also known as Dark Magic.
Add a photo to this gallery
Retrieved from "https://powerlisting.fandom.com/wiki/Light-Shadow_Magic?oldid=1622525"
Community content is available under CC-BY-SA unless otherwise noted.