Surround oneself in light.

The ability to surround oneself in light. Technique of Light Manipulation. Variation of Elemental Aura. Opposite to Darkness Aura.

The user can release and surround themselves in/with light for defensive and/or offensive purposes, possibly becoming almost untouchable and granting them various abilities/attacks. The aura may also give the user enhanced physical capabilities such as speed, strength and durability. 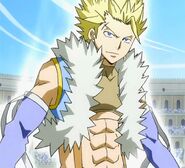 Sting (Fairy Tail) can use White Drive to surround himself with light.

Sonic, Shadow and Silver (Sonic the Hedgehog)
Add a photo to this gallery
Retrieved from "https://powerlisting.fandom.com/wiki/Light_Aura?oldid=1527680"
Community content is available under CC-BY-SA unless otherwise noted.