The Angel of Holy Restoration.

User can create, shape and manipulate the elements of a beneficial nature; that which strengthens, enhances and causes anything/everything they come across to flourish, representing the sustaining and preserving side of nature, which in turn ignores most of the common limitations and weaknesses of their normal elemental varieties. In essence, this is about solely controlling the positive powers of nature itself.

angel in a form of a woman manipulating the water. 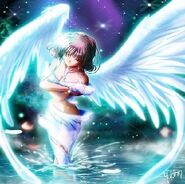 angel in the water.

angel manipulating the ocean behind.

Lugh (Valkyrie Crusade) the goddess of light.
Add a photo to this gallery
Retrieved from "https://powerlisting.fandom.com/wiki/Light_Element_Manipulation?oldid=1402990"
Community content is available under CC-BY-SA unless otherwise noted.