Niko (Niko and the Sword of Light) attacks the forces of darkness with his light energy.

The user can release/use light energy to attacks of various shapes and/or intensities, either projected, used as a part of melee attacks, etc. 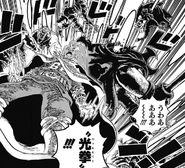 Vinsmoke Ichiji (One Piece) can generate light energy because of the genetic modifications performed on him.
Add a photo to this gallery
Retrieved from "https://powerlisting.fandom.com/wiki/Light_Energy_Attacks?oldid=1322656"
Community content is available under CC-BY-SA unless otherwise noted.