Tandy Bowen/Dagger (Marvel Comics) draws on the Lightforce for her light daggers.

User can create, shape and manipulate light energy, usually drawn from inter-dimensional or other similar sources. It can be channeled to a variety of effects as an absence of darkness, a solid, gaseous and/or liquid substance that can be shaped/manifested in various ways.

Unlike Light Manipulation, which can draw from the similar source, light energy focuses on protective, curative and the creatively preservative aspect of the spectrum, though it can still be used offensively. As light energy is the antithesis of dark energy, it can be used to promote growth, heal/purify targets and/or bring balance to a chaotic system made up of both types of energy. 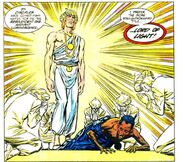 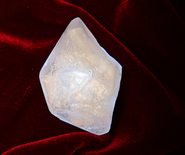 The Crown of Light (W.I.T.C.H.) can exponentially enhanced a wearer's power with its energy.

Raava (Avatar: The Legend of Korra)
Add a photo to this gallery
Retrieved from "https://powerlisting.fandom.com/wiki/Light_Energy_Manipulation?oldid=1629889"
Community content is available under CC-BY-SA unless otherwise noted.