After coming in contact with the Precursors, Jak (Jak and Daxter series) gained the abilities of Light Eco, allowing him to balance the Dark Eco within him.

"Dax... the Dark eco... it feels far away. I feel better!"
― Jak (Jak and Daxter series) after receiving the power of Light Eco

The ability to undergo a transformation to a powerful light form. Possible side effect of Lightside View. Opposite to Dark Form. Not to be confused with Light Mimicry or Light Mode.

Users of this ability to are able to transform into state of being in which they are one with their emotions, acquiring a peace of mind, and are able to expel themselves of any dark intentions. Much like the ability, Dark Form, the user's power increases, but they are able control incredible forces of light. 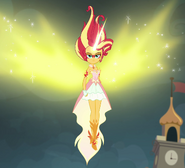 With the aid of the legendary Light Stone, Edward Falcon (Power Stone anime) can to use the power of the seven Power Stones in to transform into the Light Whirlwind.

When fuelled by thoughts of justice, Shadow the Hedgehog (Sonic the Hedgehog) assumes the benevolent form of Hero Shadow, granting him temporary invincibility, access to Chaos Control, and infinite ammunition for all of his weapons.

Hero Chao (Sonic the Hedgehog) are benevolent Chao that are the product of being raised by heroic characters.

Raven (Teen Titans/DC Comics) in the form of White Raven, a symbol of her inner purity and her highest level of power.

Angel (Tekken series) is the personification of Kazuya Mishima's inner light and goodness.

Radiant Cinderella (Valkyrie Crusade) is the light form of Cinderella, known as The Princess of Light.