After eating the Pika Pika no Mi, Borsalino/Kizaru (One Piece) became a Light Human, granting him the ability to turn his body into light and photon energy.

Have a body made up of pure light.

"Wait a minute, you two-timing spot of light! You told me to lead the English to victory!"
― Groundskeeper Willie as an English Soldier (The Simpsons)

"Well, I'm glad everything's back to normal."
"No it isn't! Meg got the dead janitor's feet, Brian and Stewie got thrown into New Hampshire by The Hulk, and you're a beam of light!"
― Peter and Lois Griffin (Family Guy)

The power to transform into or have a physical body made up of pure light. Technique of Light Manipulation. Variation of Energy Physiology. Opposite to Darkness Mimicry. Not to be confused with Light Form.

The user is made up of or can transform their body completely into light. A user's transformed form is anatomically identical to their normal form, aside of being made of light, in which case it contains all to organs and is somewhat vulnerable to attacks. Alternately, the user can transform into homogeneous matter, without any part of their form being more important than the other.

Nigh Formed Light Beings are or can change into mostly physical beings, with the energy flowing through their being, fortifying their cells, bones and muscles. Their power is mostly focused to their bodies and while they gain some amount of energy-attacks, the changes and applications are mostly internal.

Full-Formed Light Beings are completely formed of energy, without anything truly left from their physical form. They gain impressive control over their form and vast capacity to expel energy in various ways.

Galaxy-Eyes Photon Dragon (Yu-Gi-Oh), a creature made from photon. 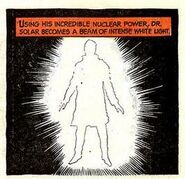 Sonic becomes the Cyan Laser (Sonic Colors), a living laser beam that destroys enemies in front of him.

Ultra Necrozma (Pokémon) is a being made out of pure light, focused in a draconic shape by its prisms.