Create a ball of electricity.
The power to create and launch spheres of lightning. Sub-power of Electricity Attacks. Variation of Elemental Ball Projection and Energy Ball Projection.

The user can generate, create compressed balls of electrical energy that are held together by their own gravity or by means of a magnetic field that collapses on impact.

When performing Electrical Luna, Carrot (One Piece) uses her Electro to charge up a ball of electricity and slams it to the ground. Doing so causes a wide-range blast capable of electrocuting several foes at once

Espeon (Pokémon) using Zap Cannon to fire an electric field cannonball that will paralyze its target. 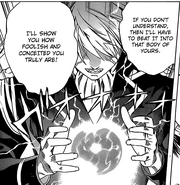 Sonic (Sonic the Hedgehog) equipped with a Lightning Shield, turning himself into a lightning ball. 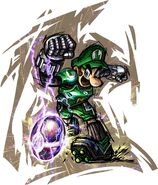 Cacodemons (Doom series) can spit balls of lightning at their enemies.

Sandra (Los Protegidos) creating a ball of electricity to short out the ignition. 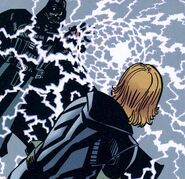 Bubbles (The Powerpuff Girls) creating a ball of electrical energy.

Dash Gardiner (Witches of East End) using his power.
Add a photo to this gallery
Retrieved from "https://powerlisting.fandom.com/wiki/Lightning_Ball_Projection?oldid=1513611"
Community content is available under CC-BY-SA unless otherwise noted.