Unlike Electrical Bolt Projection, the lightning bolts are far more deadly in terms of voltage and speed, which also grants tremendous temperature and kinetic force, averaging over 50,000°C (5 times hotter than the surface of the sun) with at least 1,000,000,000 volts, moving at 61,111 miles (97 536 km)/second. Of course, advanced users may be able to regulate the voltage discharged and speed, but the power is still enough to be lethal and cannot be compared to low-powered electrical bolts.

The Flash and Savitar (Arrowverse) projecting lightning bolts at one another. 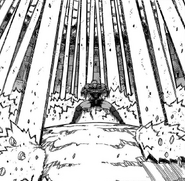 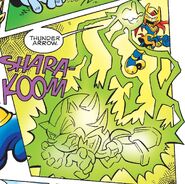 Eneru (One Piece) using El Thor to drop a gigantic lightning bolt onto a heathen, as part of his "godly duties". 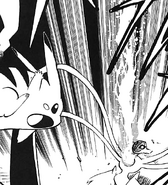 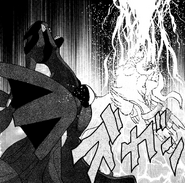 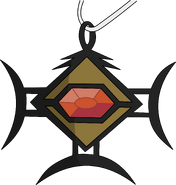 Zatch’s (Zatch Bell!) first spell, Zakeru causes him to shoot a bolt of lightning from his mouth.

Zeno (Zatch Bell!) can shoot bolts of lightning with Zakeru like his brother, Zatch. However Zeno's is more powerful and he doesn't lose consciousness when using a spell.

Thor (Marvel Comics) god of the storms and thunder

Giovanni Zatara (DC Comics/Young Justice)
Add a photo to this gallery
Retrieved from "https://powerlisting.fandom.com/wiki/Lightning_Bolt_Projection?oldid=1438595"
Community content is available under CC-BY-SA unless otherwise noted.