Sasuke Uchiha (Naruto) channeling electricity into his Indra's Arrow via his Susanoo.

Create bow and arrows from lightning.

The user can construct bows (including crossbows) and arrows from nothing or by shaping the existing lightning allowing them to attack from distance. Depending on what the weapon is made of, it can posses a variety of abilities and be very effective in both offensive and defensive combat. 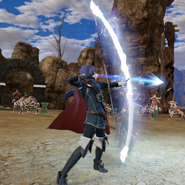