The Gang (Misfits) gained supernatural abilities after being caught in a freak lighting storm.

Receive powers from lightning bolts.
The circumstance of gaining powers, skills and enhancements via bolts of lightning. Variation of Experientially Induced Powers.

This circumstance grants the user supernatural abilities by being in contact with lightning bolts. The effects of the lightning may grant Electrical-Based Powers, Weather Powers or any powers to the victim if they survive. It may even be used to steal powers by applying electromagnetic waves directly into person's heart to steal their abilities/ability by force and then use their abilities/ability just as effectively as the original owner, drawing out one hundred percent of its potential.

Leslie Willis (DCAU/DC Comics) became a Metahuman after she was struck by a lightning bolt...

...causing her to become a human of pure electrical energy and taking the name of Livewire.

Barry Allen and Wally West (DC Comics) received their connection to the Speed Force after being struck by lightning and being doused in chemicals.

Whenever he is struck by lightning, Billy Batson/Shazam (DC Comics) can transform by activating...

...and deactivating his inherent abilities.

Complete Carnage (Teenage Mutant Ninja Turtles) received his powers and mutation after being struck by a lightning bolt...

Godzilla (Godzilla) gained the power to generate magnetic fields after being struck by lightning repeatedly. 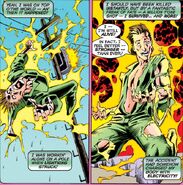 Max Dillon (Marvel Comics) gain his electrical abilities after being struck by lightning.

...and gain the abilities of the Mighty Thunder Norse God, Thor... 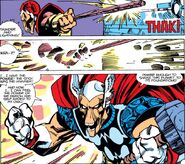 ...as would anyone who proved worthy of wielding Mjolnir, such as Beta Ray Bill.

Quick Charge (Stretch Armstrong and the Flex Fighters)
Add a photo to this gallery
Retrieved from "https://powerlisting.fandom.com/wiki/Lightning_Induced_Powers?oldid=1539216"
Community content is available under CC-BY-SA unless otherwise noted.