One of the T-1000 infiltrator Series (Terminator: Genesis)

User can create, shape and manipulate liquid metals, metals/alloys with very low melting points which are liquid at room temperature. Alloy systems that are liquid at room temperature have thermal conductivity far superior to ordinary non-metallic liquids, allowing liquid metal to efficiently transfer energy from the heat source to the liquid. They also have a higher electrical conductivity and high densities. This results in the use of these materials for specific heat conducting and/or dissipation applications.

Enel (One Piece) could control molten gold via his electrical heat.

Bill (One Piece) could control molten silver via his blast furnace. 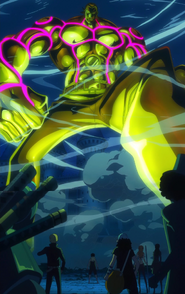 Gild Tesoro (One Piece) can control gold in any form, including molten liquid.
Add a photo to this gallery
Retrieved from "https://powerlisting.fandom.com/wiki/Liquid_Metal_Manipulation?oldid=1490671"
Community content is available under CC-BY-SA unless otherwise noted.