Have a body made up of liquid substances.

The power to transform into or have a physical body made up of liquid substances. Technique of Liquid Manipulation. Variation of Elemental Mimicry.

The user can morph their body into a liquid state, is made up of or can transform their body completely into liquid substances. A user's transformed form is anatomically identical to their normal form, aside of being made of liquid, in which case it contains all to organs and is somewhat vulnerable to attacks. Alternately the user can transform into homogeneous matter, without any part of their form being more important than the other.

Mayuri Kurotsuchi (Bleach) liquefying his own body to escape harm.

Super Buu (Dragon Ball) liquefying his own body to use his terrifying "Dangerous Liquid Bomb".

Baby (Dragon Ball GT) turning himself into a liquid.

Mercury (Marvel Comics) is made from non-toxic mercury.

Honey Queen (One Piece) can turn into a liquid after eating the Toro Toro no Mi.

Kouzaku Mitori (Toaru Kagaku no Railgun) ability is Liquid Shadow which allows her to create and shape a liquid puppet which is immune to teleport attacks and electricity as well use it for various purposes...

...manipulating parts of it's shape, solidifying the liquid to harden it powerful enough to slice through hard objects...

...and sprout multiple tentacles to attack a skilled teleporter such as Kuroko.

Chaos (Sonic the Hedgehog) is chaos energy in liquid form. 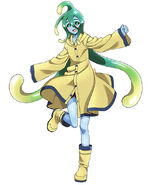