Rita Mordio (Tales of Vesperia) using a scroll to prepare an attack.

Use literary as weapons.

"How about a magic trick? I'm going to make this pencil disappear."
― Joker (The Dark Knight)

User can wield any literary-based objects (books, scrolls, tablets, etc.) as weapons with great skill and proficiency. The type of literary weapon they're using can have many different defensive and offensive uses, the literary weapon can even have magical or other supernatural properties.

See Also: Throw the Book at Them.

Zexion (Kingdom Hearts series) possesses the power of illusions through his lexicon, "The Book of Retribution".

The Bookmaster (Kingdom Hearts II) is a fairly common heartless that can cast spells and use its book for blunt force. 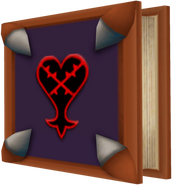 Akashic Record (Kingdom Hearts II) is a shield dropped by a Bookmaster that can be used by Goofy.

Sir Isaac Ray Pelham Westcott (Date A Live) possesses Nia Honjou's Demon King, Beelzebub, which is in a form of a book.
Add a photo to this gallery
Retrieved from "https://powerlisting.fandom.com/wiki/Literary_Weapon_Proficiency?oldid=1144095"
Community content is available under CC-BY-SA unless otherwise noted.