To apologize for interrupting a children's birthday party, Promethea (Promethea) summoned characters from various popular books and fairy tales to entertain them.

The ability to bring literary characters to life. Technique of Literary Manipulation. Variation of Entertainment Materialization.

User can bring to life and wield the worlds created in literature into reality and may only be restricted by the sources or their own imagination/creativity. 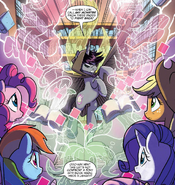 Shadow Lock (IDW's My Little Pony: Friendship is Magic) is capable of summoning creatures from stories in order to fight back.