Momo Yaoyorozu's (Boku no Hero Academia) Quirk, Creation, allows her to materialize different objects, such as weapons and tools, from any exposed part of her body.

User can create a variety of items from their body or merge into/with surrounding material to create it. The items can vary from living or non-living, sentient to non-sentient, weapons, items or creatures and can be be stored in the user's body for future use.

As a vuldarian hybrid, Guy Gardner (DC Comics) can fashion a colorful menagerie of arms out of his own body....

...be it complex firearms to simple razor edges all under his complete control. 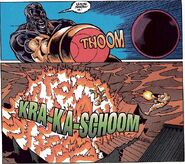 Major Force (DC Comics) was modified with Guy Gardner's DNA, allowing him to manifest weapons and items out of his body as well.

A castoff of the Martian Manhunter (DC Comics) can summon and fashion his metamorphic tissue into various items... 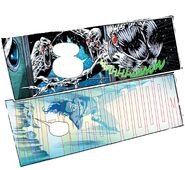 ...ranging from pistols, bodily shielding, sabres and even Psychokinetic grenades.

Suh Bummgi's (Trace 2.0) abilities as a superhuman manifesting as...

...he takes off a limb only to regrow a new one while the remains...

...transmorph into a colorful set of tools at his disposal. 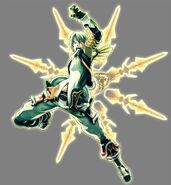 Spawn (Image Comics) often uses his necroplasm in conjunction with the K-7 Leetha to fabricate objects that he can use... 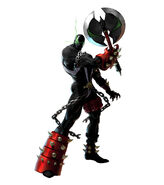 ...and a variety of chains.

Naraku (Inuyasha) is so adept at manipulating his biomass, that he can create demonic weaponry with fractions of his power within them, and remain distinct part of him no matter how far apart they are.

The War Hammer Titan (Shingeki no Kyojin) can separate and harden it's own flesh...

to fabricate weapons and armor out of which that they can control remotely.
Add a photo to this gallery
Retrieved from "https://powerlisting.fandom.com/wiki/Living_Factory?oldid=1299890"
Community content is available under CC-BY-SA unless otherwise noted.