Ero/The Other (Marvel Comics) is a living swarm of spiders.

The ability to turn one's body into a living hive, and control the creatures in a symbiotic relationship.

The user has a symbiotic relationship with whatever life forms (insects, worms, snakes, etc.) they are sharing a body with. The insects get food from either the user or from whatever the person wants them to devour, and they use them for their needs.

In several cases, the user is actually a hive-minded swarm of the creatures.

The Nesk (Animorphs) are alien ants that can join together to form bodies.

In his new insect form, Clancy (Ben 10) can project swarms of insects from his mouth.

After being hit by The Shadowed One's disintegration eyebeams, Zaktan (Bionicle) was turned into a living swarm of millions of Protodites, each one containing a portion of his consciousness.

Norman Pfister (Buffy the Vampire Slayer) is a hive-minded swarm of maggots that can take on the appearance of a normal human.

Using the 【Insect Binding Technique】 skill, Vandalieu (The Death Mage Who Doesn't Want a Fourth Time) can equip tamed insects inside his body and produce them or a part of them from his own body.

...a process he also subjected Sakura to.

Aragami like the Vajra (God Eater) are thousands of semi-sentient unicellular life forms attached to a core, all sharing a swarm intelligence.

Megaera (God of War) has numerous parasites inside her and which she can call forth through rashes on her body.

Destoroyah (Godzilla) is a sentient hive of mutated Precambrian crustaceans that can take on a variety of forms.

The Bogeyman (Martin Mystery) is able to turn his body in a maelstrom of maggots.

Fritz von Meyer/Swarm's (Marvel Comics) entire body, except for his skeleton, is composed of bees.

The Thousand (Marvel Comics) is, hence his name, a hive-minded swarm of a thousand spiders.

D'Vorah (Mortal Kombat X) houses a variety of insects and worms within her body.

Shino Aburame (Naruto), like all members of his clan, houses chakra-eating kikaichū insects within his body.

In his true form, Orochimaru (Naruto) is a giant snake composed of many smaller snakes.

Oogie Boogie (The Nightmare Before Christmas/Kingdom Hearts) is a colony of bugs wrapped in a burlap sack.

Mushizō's (Ninja Scroll) hunched back is used as a hornet's nest.

An experimental Parasite created by Reiko, Gotou's (Parasyte) body is composed of five different parasites, one in his head and four in his limbs, something he can utilize to the fullest extent.

After being assassinated by the Umbrella Corporation, James Marcus (Resident Evil) reanimated himself into a monstrous leech with the ability to control and house other leeches.

Million Ants (Rick and Morty) is a colony of ants.

Grayroad (The Seven Deadly Sins/Nanatsu no Taizai) is a single being composed of numerous pudgy, dwarf-sized gray demons.

After his death at the Turtles' hands, the Shredder (Teenage Mutant Ninja Turtles Mirage) was resurrected using a colony of mystic worms…

…and infested a shark, transforming it into a mutant monster with Shredder's memories.

Nrvnqsr Chaos (TYPE-MOON) is a living mass of chaotic matter analogous to a primordial soup, created from the accumulation of the lives of 666 creatures. 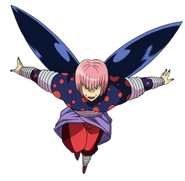 Tommyrod (Toriko) has thousands upon thousands of parasites and insects in his stomach
Community content is available under CC-BY-SA unless otherwise noted.