The Asari (Mass Effect series) have a life expectancy of over 1000 years.

The power to possess a long lifespan. Lesser version of Semi-Immortality. Not to be confused with Decelerated Aging.

Superman (DC Comics) While exposed to the rays of the yellow sun, Superman will have an extended life

The Heart of Atlantis (Atlantis: The Lost Empire) has the power to grant longevity to its people who bear its crystals...

... Kida being one of many atlanteans is over hundreds of years old yet appears in her 20s.

Ancient human descendants of Adam and Eve (Biblical Mythology) once all had longevity that lasted nearly 1,000 years, however due to mans continued corruption God stripped them to last 150 or even less because by his declaration humans are suppose to be mortals as such they will live and die as mortals.

Yoda’s species (Star Wars) can live up to over 900 years.

Zoras (The Legend of Zelda series) have a much longer lifespan than normal humans...

...with King Zora (The Legend of Zelda: Oracle of Ages) living for four hundred years... 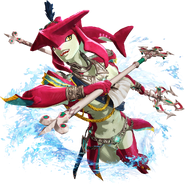 ...and Sidon (The Legend of Zelda: Breath of the Wild) being a child prior to the Great Calamity, and a full grown adult a century later.

Wonder Woman (DC Comics)
Add a photo to this gallery
Retrieved from "https://powerlisting.fandom.com/wiki/Longevity?oldid=1765028"
Community content is available under CC-BY-SA unless otherwise noted.