Copy and use the powers of others who are loyal to you.

The ability to replicate and use the powers of anyone loyal to you. Variation of Power Replication and Trust Manipulation.

The user can replicate and use the skills and abilities of anyone based on how loyal they are be it friends, family, or comrades. Some users may gain powers at random based on the number of people loyal to them.

Reinhard Heydrich (Dies Irae) is capable of utilizing all the abilities of his Legion, and anyone who falls by his hand will have their powers added to his arsenal as well. 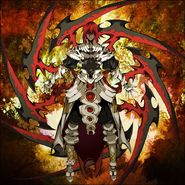 Tenma Yato (Kajiri Kamui Kagura) can use the abilities of his legion.
Add a photo to this gallery
Retrieved from "https://powerlisting.fandom.com/wiki/Loyalty_Based_Power_Replication?oldid=1554438"
Community content is available under CC-BY-SA unless otherwise noted.