Ladybug (Miraculous: Tales of Ladybug & Cat Noir) has the power of "Lucky Charm", a good-luck based superpower where she creates an object used for defeating her foes in unpredictable ways.

The power to perform luck-related magic. Variation of Probability Manipulation. Form of Magic.

The user is able perform a form of magic that allow the user to cast magical spells feats through luck. They can use different spells to change the probability of an outcome, increase their own chances of winning, cause a mistake to happen to the opponent and so on.

The Ladybug and Cat Miraculouses (Miraculous: Tales of Ladybug & Cat Noir) are magical artifacts that grant the users power over the forces of creation and destruction, equating to powers based around good luck and bad luck respectively.

Cat Noir (Miraculous: Tales of Ladybug & Cat Noir) has the power of "Cataclysm", a bad-luck based superpower that causes whatever he touches to corrode, disintegrate, or malfunction.

On top of having Cat Noir's appearance, Copycat (Miraculous: Tales of Ladybug & Cat Noir) can also utilize his "Cataclysm" ability.

Charm of Luck and Probability (Ben 10) 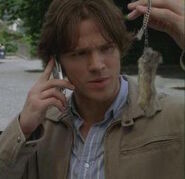 The Rabbit's Foot (Supernatural) is a cursed object that grants those that wield it absurdly powerful good luck. When they lose the foot, their luck becomes so horrible that it kills the former user within 24 hours.

Scarlet Witch (Marvel Comics) is a mutant with the power to manipulate probability. After training to use magic by Doctor Strange, she was able to use her powers on a near cosmic scale through the use of chaos magic.

John Constantine (DC Comics/Vertigo) is able to use a magic ability called "synchronicity wave travelling", which increases his luck exponentially.
Add a photo to this gallery
Retrieved from "https://powerlisting.fandom.com/wiki/Luck_Magic?oldid=860483"
Community content is available under CC-BY-SA unless otherwise noted.