The ability to release/use lunar energy/substances to various attacks. Sub-power of Lunar Manipulation. Variation of Attack Powers. Opposite to Solar Attacks.

The user can release/use lunar energy/substances to attacks of various shapes and/or intensities, either projected, used as a part of melee attacks, etc., from huge rays of pure energy that can knock over or even obliterate dozens of targets, or slightly singe them. 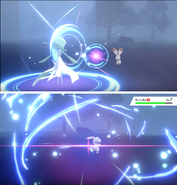 Umbreon using Moonlight to restore its health
Add a photo to this gallery
Retrieved from "https://powerlisting.fandom.com/wiki/Lunar_Attacks?oldid=1622898"
Community content is available under CC-BY-SA unless otherwise noted.